As algorithm grow more complex, they also grow hungry for more data, to be able to learn precisely the meaning of the sentence. In Text Classification task for example, the variety of words encountered allows for a much more resilient algorithm, especially when in production with a taste of real word data.

Just as in Computer Vision where biases such as detecting a seagull is more correlated with the presence of the beach rather than the bird itself, words in NLU can be baddly associated with an incorrect class and can thus be a threat in the case of real world use, as examples get harder to discriminate. If automatic generation of new data can be of help in simply increasing the number of training example, how good is it performing against the use of more training data from the same dataset, and are there way to efficiently generate more data ?

This article is inspired by the paper Learning the Difference that Makes a Difference with Counterfactually-Augmented Data, that can be found here on arXiv

In this study, the authors point out the difficulty for Machine Learning models to generalize the classification rules learned, because their decision rules, described as 'spurious patternes', often miss the key elements that affects most the sentiment of a text. They thus decided to confusion factor, by changing the label of an asset at the same time as changing the minimum amount of words so those key-words would be much easier for the model to spot.

We'll go through details of the paper for a text-classification task, and study

We'll use the data of the study, the IMDB sentiment analysis dataset, publicly available here. The dataset consists in 50k reviews of movies, and the task is to classify those reviews as positive or negative opinions about a movie.

In the article Learning the Difference that Makes a Difference with Counterfactually-Augmented Data, the authors created a new labelling task based on the IMDB dataset. On a subset of reviews, it was asked the annotators to change the class of the review by changing the minimum of words in the review.

We will use in this study different machine learning models, and analyze their performance on the original data to understand how well counterfactual data can improve performance on this text classification task.

Data is collected from the original IMDB dataset and the study presented above. It is a subset of review written on the IMDB website, along with a sentiment (Positive or Negative). The task for the algorithm is to classify properly each of the reviews. Here, we will use both the counterfactually generated reviews and the original reviews, and also a combination of both.

More precisely, we will use those 4 datasets :

And use those values to determine which words or bigrams are kept. We keep in this study conservative parameters, with unigrams and bigrams, the 75% less represented words of the corpus, except those present in less than 5 documents, limiting to 20000 words in total.

We chose different enough models, to grab a better sense of the type of circumstances in which counterfactual data can be of help. The models tested are the sklearn implementation of :

We also use Keras to implement a Neural Network for sequence models :

The metric used is the accuracy, as the dataset is balanced so it is not biased for this task and metric.

The interest of such a technic is primarily to help the model grab a better sense of the useful words that really encapture the meaning of the sentence. As a matter of fact, a model trained on the original data fails to score better than random guess on counterfactual out-of-sample data. The opposite is also true, a model trained on counterfactual data scores very poorly on original data, not better than random guess on out-of-sample data. 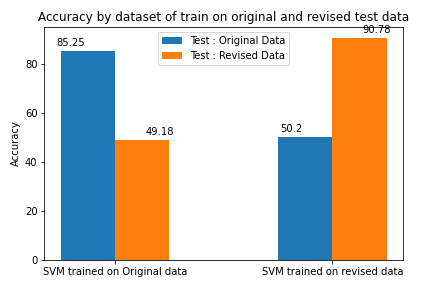 This effect of resilience is well illustrated for the SVM or LogisticRegression classifiers, as it is possible to compute the feature importance of each word for the task. The comparison between the key words for the model trained on the combined dataset and for the original dataset is striking.

The words that most contribute to the classification of the review are often not those that are most useful (words like classic, one of, romantic, or something for example)

On the contrary, a model trained on the combined dataset (with both the original and the revised dataset), has much more coherent words as important features, increasing the ability of the model to classify correctly out-of-sample examples. 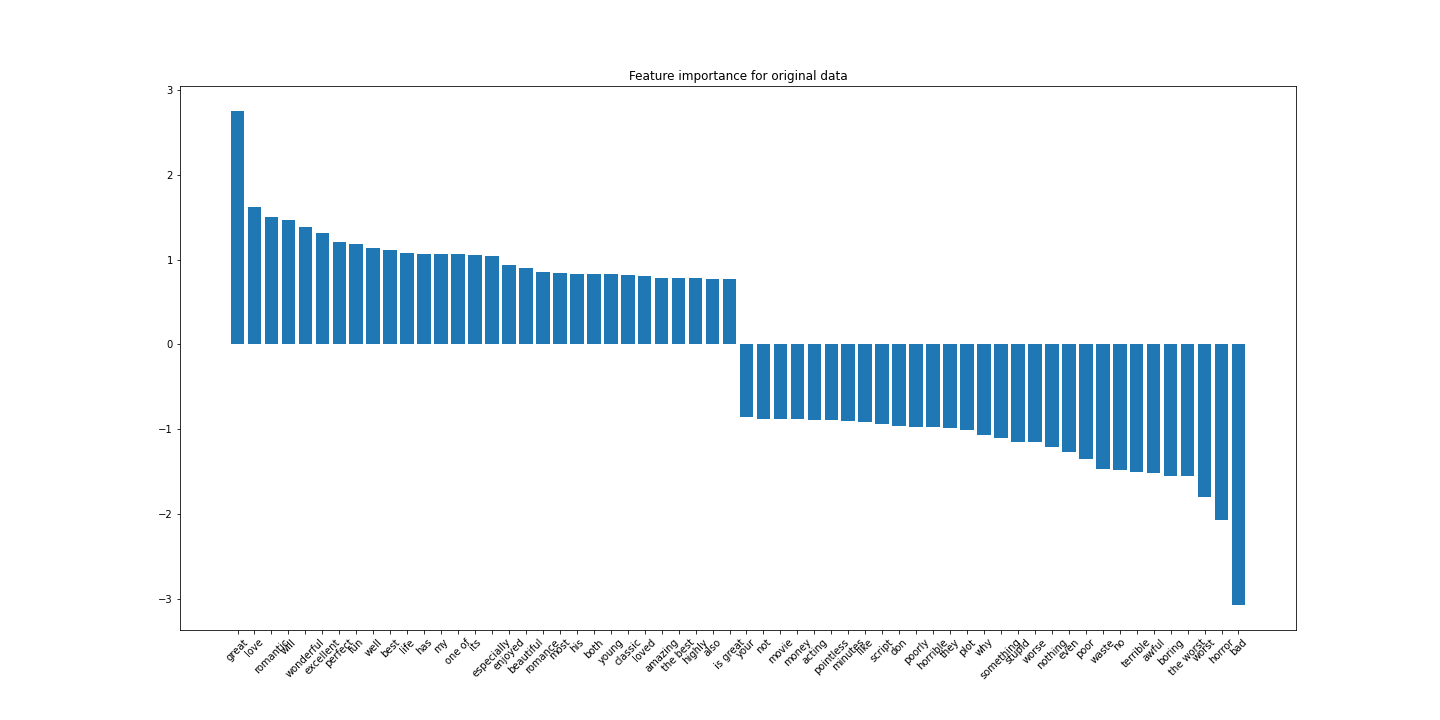 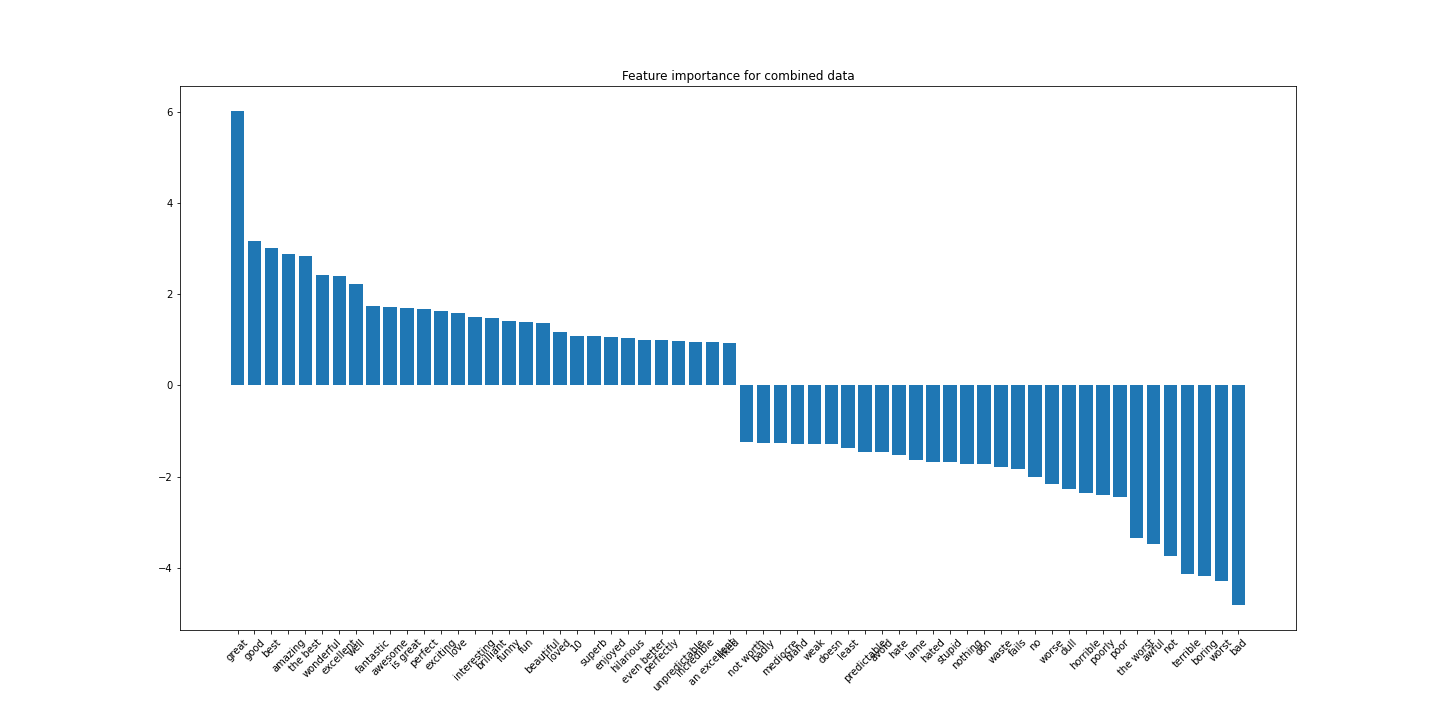 To analyse better how the counterfactual data helps, let's analyze how those feature importance changes from one dataset to the other, by substracting to the original list the combined one. We obtain for the main factors for original data how counterfactual reweights the features to be less biased. Below are the figures for the most important features for the Positive and the Negative Class. For the word greatfor example, it is reweighted 3 points above its value, whereas the importance of the word romantic decreases from 1 point. For the features important to classify negatively a review, the word horror was important but it's importance is now reduced from 2 point (bar in the opposite direction as features are negative), just like the word something, why, plot,... 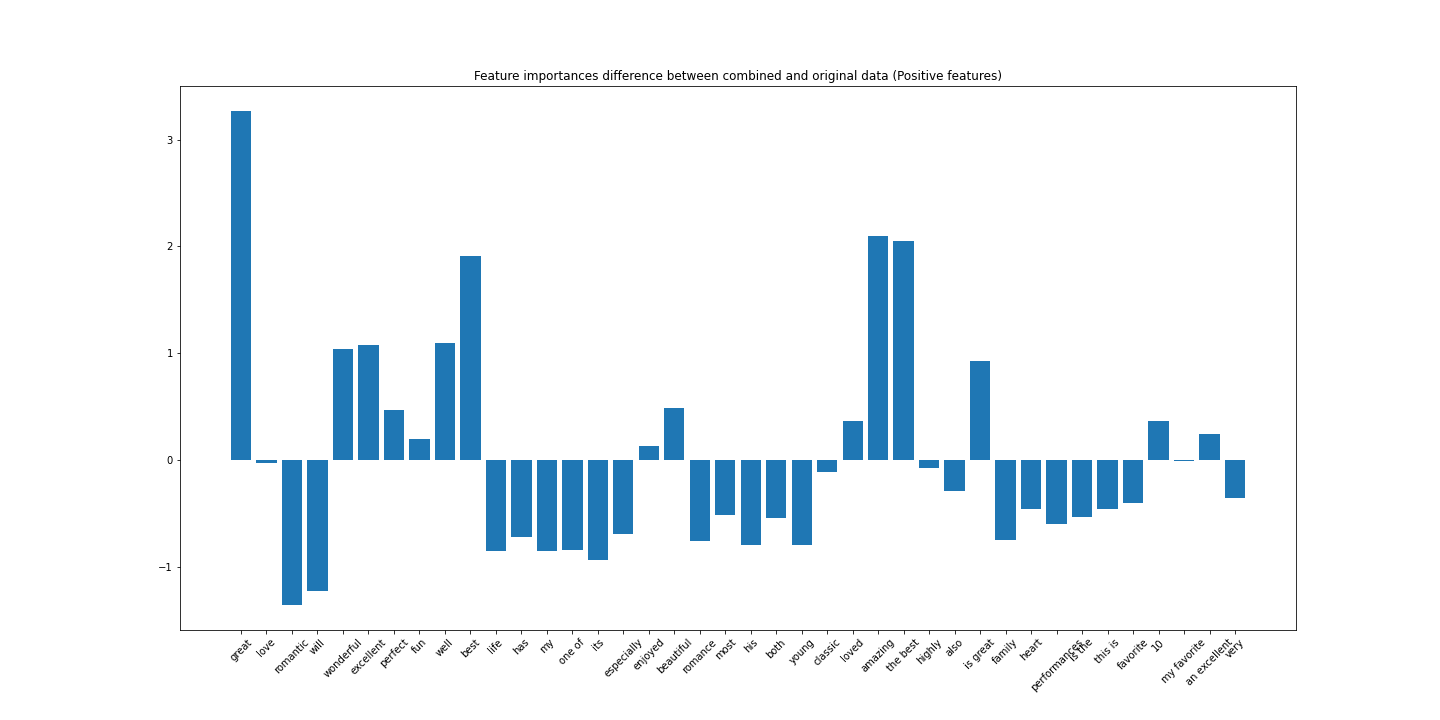 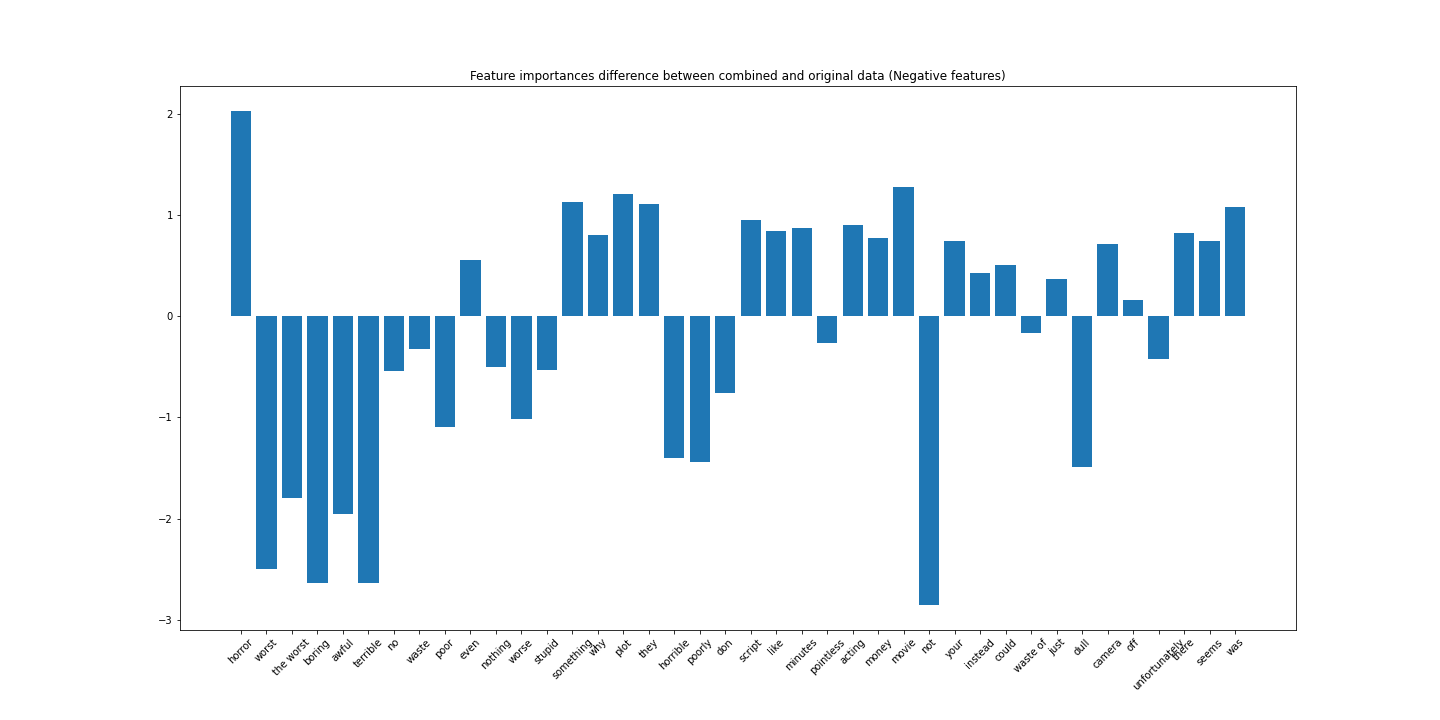 Furthermore, the performance is much better for this last model, on both the revised and the original dataset

For a more accurate comparison, we choose to compare the performance of models trained with the same number of data. Below are gathered the results accross multiple models on the original test data.

It is interesting to differentiate 3 different situations in the results above :

Furthermore, another difficult thing to determine is the real convergence of the models, for the small number of training data provided. This can explain other discrepancies, such as with LSTM algorithm where the best perofrmance is obtained with the original 1,7k dataset.

The main interest for counterfactual data is thus this ability to train a State of the Art model with a simple algorithm. With quality data, and accross models, the difference is not so significative, but counterfactual data also has other advantages.

Robustify a model with counterfactual data

Another great interest for counterfactual data is that, when used with a fully parameterized model with a large training set, the performance increase is steady around 1% for almost all models tested here.

To evaluate further the interest of the counterfactual annotation process, we decided to evaluate the difference in costs between collecting more data and creating counterfactual data. We thus reproduced the task of writing movie reviews, and present below the results of such a labelling task, for 100 words of reviews produced.

The first project reproduced is the original IMDB task, onto the Kili plateform.

Labelers are asked presented with a movie poster, and are asked to write a simple review positive or negative about the movie. Movie can be skipped if it is unknown. The dataset used came from two public IMDB best movies lists, and is interesting to not that the proportion of skipped movies was very high (Between one out of 8 movies and 1/3 of movies were known, even on a list of famous movies.) Below is a screenshot of Kili's overview interface in a project.

Along the task, labelers can also quickly access extra synopsys information on the interface, to accelerate the task.

Thus, we leveraged the strength of the annotation plateform to make the task as fast as possible, and we record for each review the length of the review produced, and the time to produce the review. 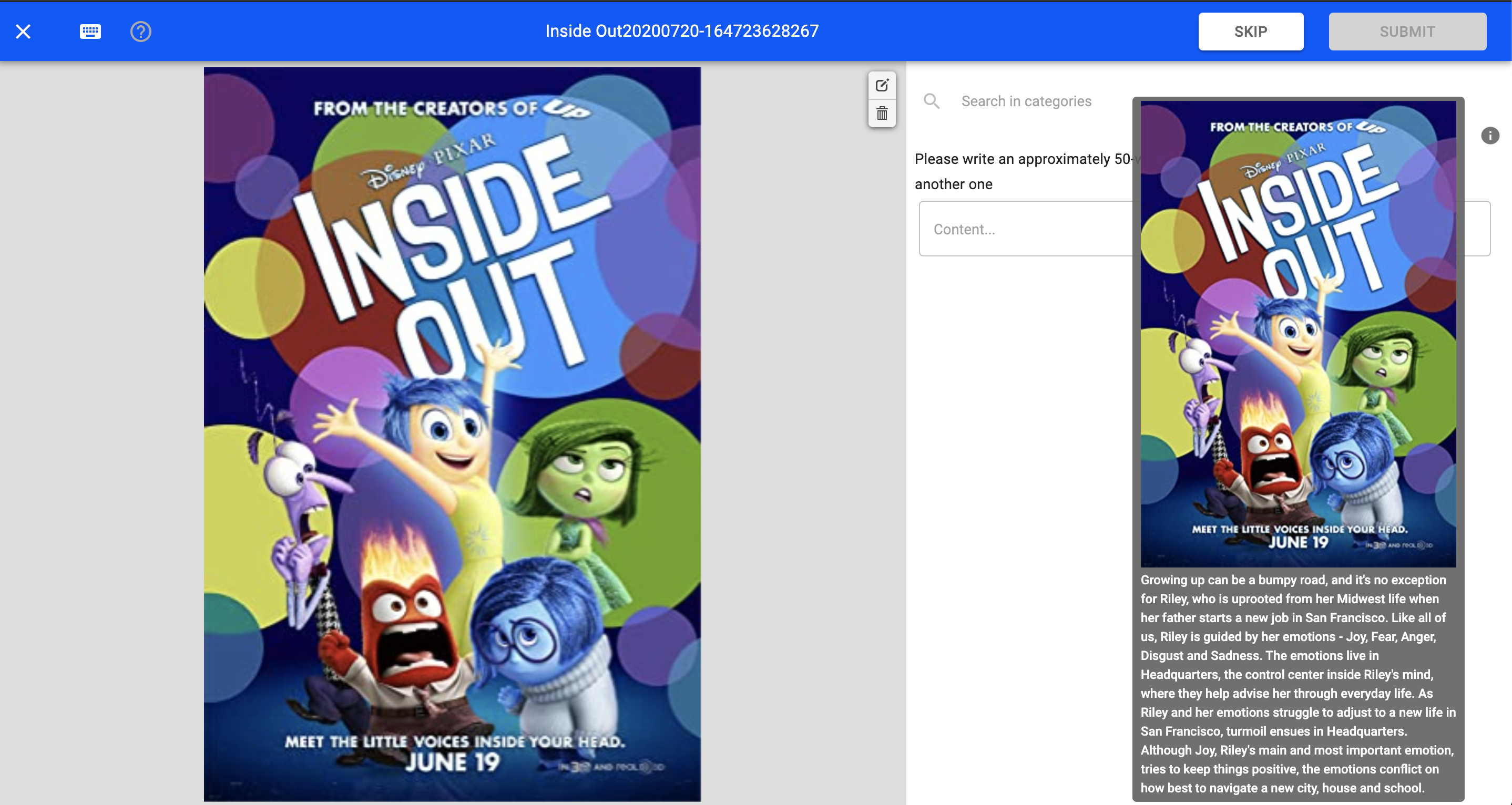 In a second project, the same labelers are provided with original IMDB reviews, and are asked to produce counterfactual variation, by changing the smallest number of words possible. Again, we compute the time needed to produce the review, and the length of the review produced.

The figures are then exported through Kili Playground, and the distributions are represented below : in blue for counterfactual project, and in orange for original project.

It is important to notice the mean produtivity : 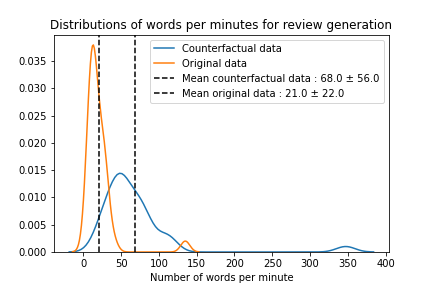 To conclude, we can argue that

It seems that there are three mains interest to use counterfactual data augmentation.

We studied here the case of text classification, but this could be done for many others fields of NLU, for examples Named entities recognition or intention classification. One of the primary use of this technic could thus be the development of chatbots, in which all those tasks are of primary concern.

For future work, we want to focus on those other tasks, but also be able to generate more counterfactual data than original, and analyze the performance in those case. For this, we are going to explore leads to generate massively revised data, with technique such as machine translation or massive data augmentation techniques.

← Create a projectExporting a training set →